In between the establishment GOP elected elite and their fellow pundits,  all in an uproar about Newt’s rise in the polls, and the Ron Paul supporters pouring on the steam pushing their guy… let’s have another type of fun, shall we?  After all, these are the days when people like Palin and Cain are tried in the court of public opinion based on past confessions and accusations.  It would be a pity to leave Obama out of our new age justice system. 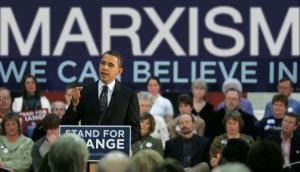 Seems that an old story is rebounding via Selwyn Duke over at the New American today.  An old Occidental College contemporary of Obama’s three decades ago – John Drew, himself a self-described Marxist at the time – says that Obama was an “ardent Marxist-Leninist” during his years there, and as of today, Drew doesn’t think he’s changed one iota.

END_OF_DOCUMENT_TOKEN_TO_BE_REPLACED

Every  Obama speech is fraught with lies and half-truths.  He relies on his belief  in the ignorance of his audience, and that Americans are too lazy and soft to  recognize his dishonesty.  When your record is abysmal, you can’t tell the  truth.

Obama,  hasn’t a clue on how to fix the economy.  Instead, without ideas, he copied  Teddy Roosevelt’s 100-year-old speech in Osawatomie.  With Barack Obama, it’s always  yesterday’s answers to today’s problems…and this is the man they told us was a  genius.  The president maintains that the rich get richer by making  everyone poorer.  Ah…bitterness and envy, the illegitimate stepchildren  of hope and change.

END_OF_DOCUMENT_TOKEN_TO_BE_REPLACED

WITHIN mere minutes of spotting a car travelling on a dusty track in the United States’ south-western desert, the Republic of Singapore Air Force’s (RSAF) latest and most lethal “smart” bomb found and hit its target.

The 1.6 million-hectare Barry M. Goldwater Training Area in Arizona – about 19 times the size of Singapore – was where the RSAF dropped the Laser Joint Direct Attack Munitions (Jdams) bomb for the first time on Friday.