The latest in a series of revelations in the ongoing saga of the Fast and Furious scandal — where more than 2,000 rifles were knowingly and willfully allowed to be transported untracked from the United States into Mexico — is truly stunning. 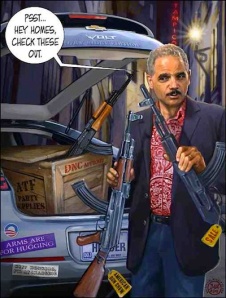 A series of damning memos from 2010 was recently obtained by CBS News, and they indicate that Attorney General Eric Holder — as well as several senior Justice Department officials — were aware of the deadly program.