While back in Hawaii by late June of 1980, we went back to Honolulu for liberty.  I don’t remember the exact address, or the exact business, but one August night, early August 1980, I stopped at a small shop that was either on Kalakaua Blvd, now called Ala Moana, or the street just north of it, one block north.  I struck up a conversation with a young man, Mulatto, about 18, all teeth, smiling, skinny, short hair that I remember, at least short for the year we lived in.

We struck up a conversation simply because he was at the same place as I was.  He appeared to be either an employee there on his off day or was visiting the other older Black American man working there. “Hey, are you a military dependant or do you live here?” I asked. He told me he lived in Hawaii. Not too many black Americans lived in Hawaii at all then, so his being there was an oddity in itself. Heck, my hometown of 16,000 in Connecticut had only three or four Black families until 20 years ago.  I asked if he was in the service and he said no. I told him that I was a Marine and had recently gotten back from float. We spoke of world travel at this time and I told him the places we went to.

What strikes me most is what he said as to where he grew up: Indonesia. Having stopped in the Philippines and Thailand that previous deployment made me curious and I asked him if Indonesia was as poor as the Philippines, but he hadn’t been to the Philippines so he didn’t know.   We had spoken of how both our travels abroad had given us great perspectives in how we viewed the world.

For myself, I admit that things I had heard of how superior the United States was were proven accurate and also proven false. Our nation was surely the greatest in economic power, with technical jobs for those who searched it out, with higher pay for our labors. Many other places I had been to in the western Pacific had complete poverty; mothers who take their daughters into the field where Marines are deployed and try to prostitute them for money so they have food to eat, women who believe there is no better way to advance their own lot in life than to become a prostitute themselves and try to marry an American who is lonelier than another and would take her home as a bride. But the people, I expected something different, I can’t put a word to the emotion or expectation, but because of my travels, I learned that the heart of man is identical across the world.

People want something better for themselves and they want something better for their children and many are willing to go to great lengths to find it, using methods that we would find repulsive, but be sympathetic to because of their poverty.  I used to think of Americans as “better people”, that our nation was superior, but I learned that we are different because we were blessed, not because of whom we are but despite whom we all are inside. The persons I met were no different than anyone I met here at home in their basic character, they were just living in a culture that either allowed them to naturally succeed or one that forced them, or appeared to force them, to do things to survive that our American culture has long forgotten about.

I asked this Indonesian immigrant of these things but he told me those things were not common where he grew up. Our conversation drifted to our dreams of what we are going to do once we are “all grown up”.  I replied that I was not sure and most likely would either re-enlist in the Marines or go home to attend college on the GI Bill.

He told me he wanted to be President of the US someday. I remember lightly smiling and commenting that maybe by the time he gets to be 40 or so, America will be ready for a Black man to be President and I wished him luck. We spoke of the racial tensions I saw at home while growing up, of the outright hostility of Hawaiians toward white Americans and black Americans and I asked him if he ever saw that overseas or since he returned back to Hawaii.  I don’t remember his answer, but we spoke more of his time overseas and his thoughts on life and philosophy of government.

He also told me something that I never forgot, for it caused me to do some other things later in an effort to be nice to him. Since we spoke of where I had been and the world as I saw it, I told him I had been to Africa, Mombassa specifically, and he said to me abruptly, “I was born there.”

I told him he is not eligible to be president if that was true, but I remembered he said his mom was an American, so, maybe it was okay.  But it was what I did after that makes this a true memory: I went back to the barracks and told others of this guy and suggested we all grab our photo albums and visit him again and show him pictures of Mombassa so he could see where he was from.

No one wanted to go, and before that time, my camera had failed the weeks before we hit Mombassa. It was late August or early September until I had borrowed someone else’s pictures to develop myself so I had copies of pictures of where I was.  But I never forgot meeting that man for those reasons.  I was going to do him a favor and show him his home country of birth.  And I never went back for some reason, most likely I forgot to or just felt that a one time chance encounter would be meaningless to both of us and didn’t mean we were friends.

In the light of what is called the ‘Birther’ movement these memories are foremost in my mind. While I cannot swear it was Barak Obama, nor can I prove it beyond doubt, all the details I do remember of that chance encounter fit the profile of the man who some people claim was born in Kenya and others claim he was born in Hawaii.

The man I met was about 18, thin, Mulatto, told me he was born in Mombassa, raised in Indonesia, was living in Hawaii and hadn’t yet been to many places in the world outside of those places, mostly, hadn’t been to the mainland of America for any long time period if at all.  And he openly told me he wanted to be President.

And I remember that face, the face of a young man who sat on a table or countertop to my right front, his hands resting on the edge, him leaning forward, his grin; all teeth.  It was Barak Obama.  I don’t know if I’d bet my life on it, but I am willing to tell people openly at the risk of my ridicule.  I was there, and saw him, spoke to him, and he openly told me he was born in Mombassa, Kenya, not Hawaii.

Does it matter? Of course it does. It should not have to be explained why it matters.

The Original Posting is here.

Worst. President. Ever.
The Obama White House told reporters they will proceed with new EPA rules that will shut down 8% of all US power generation.  The latest move by the EPA will affect 26 states.

The White House said they will stand behind their new job-killing air rules that will totally devastate the Texas economy and put thousands of lives at risk.  The White House cited their own bogus study insisting that closing the power plants will save 34,000 lives each year.  (What rubbish!)  They are using this lie to push their devastating policies on the people of Texas.  They would rather see thousands of Texans die in the sweltering summer heat when their power goes out.
The AP reported:

END_OF_DOCUMENT_TOKEN_TO_BE_REPLACED

An ATF source has provided reporters a copy of a letter sent on June 1, 2010 which indicates that the monumental scandal known as ‘Project Gunwalker,’ or ‘Operation Fast and Furious,’ was never a sting operation as previously reported. If such an allegation is true, then the official Obama Administration explanation for the operation is entirely false.

END_OF_DOCUMENT_TOKEN_TO_BE_REPLACED

There’s an old saying that seems to apply: “Creative minds are rarely tidy.”
I’ve used that often to explain my desk/workspace. Put another way, an organized
desk is the sign of a sick (or vacant) mind. 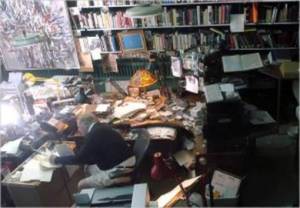 Albert Einstein was said to be the smartest man ever, they also said he fail math in school. 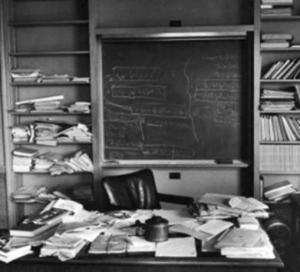 Then there is Barry O. There is still a mystery as to who he really is. Liberals say he is the smartest man ever but Libs say a lot of things. 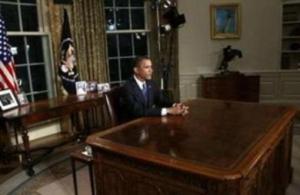 Maybe this photo now explains why he plays golf all the time, it sure does explain why you never see him hard at work. Harvard must be proud.

My thanks go out to Beagle Scout for contributing to this story and for the photos.

This one just added, Jim Campbell. Jim is a great author and a personal friend who helped me get this site started. From the looks of his desk, he could do a better job then Obama in his sleep. 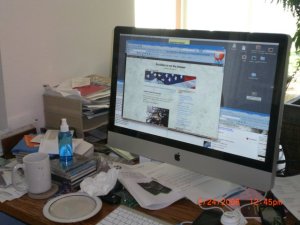