As the United States of America continues to drift, many Americans still seem perplexed that after two-and-a-half years, Barack Obama is a walking contradiction. He cannot seem to lead; he can only follow and dictate. He has no policies, only vague concepts and Marxist ideology. He starts wars and calls them something else. He simultaneously makes Congress responsible and yet irrelevant. He refuses to be held accountable for anything. It’s all still Bush’s fault, you know. 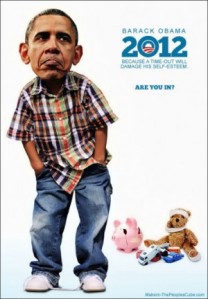 One of Obama’s last official acts as a United States Senator, before winning the 2008 presidential race, was to vote, along with his opponent, Sen. John McCain, for more than $700 billion in bailout money for the Troubled Assets Relief Program (TARP), a slush fund for big banks and insurance companies.

He came into office dictating that Congress pass a bill authorizing another slush fund of nearly $900 billion. He called this one a “stimulus package.” He gave vague lip service to “shovel-ready jobs,” which he has since admitted were not as shovel-ready as he had led the American people to believe. But he really didn’t specify the items for which this massive pile of borrowed cash would be used. He simply demanded that Congress authorize it and have it ready for his signature as soon as possible after he took the oath of office. He used part of it to prop up two bankrupt car companies so they would not have to lay off union workers (the only workers he seems to care about). Much of it has gone to infuse faltering state governments with ready cash, which is to say that it went to save the jobs of public sector union members.

He shook down BP, demanding cash from the oil giant to create yet another slush fund as the price for the sin of polluting the Gulf of Mexico. Does anyone have any idea where that $20 billion went? Certainly not to the hard-hit businesses along the Gulf Coast who were supposed to get it.

He demanded a massive health care bureaucracy, but he provided no specifics at all as to what he wanted it to do, who he wanted it to cover or how he wanted to finance it. He left those decisions up to Nancy Pelosi, Harry Reid and his other toadies in Congress. They created a bloated, unworkable monstrosity that now bears his name: Obamacare.

He and his party cannot pass a budget. He has spent more borrowed money than all of his predecessors combined, yet he is trying to convince the American people that he is a deficit cutter. Then he demands that the national debt ceiling be raised and warns of economic calamity if he doesn’t get his way. His actions are reminiscent of the story of the son who murders his parents and then throws himself on the mercy of the court because he is an orphan!

House Speaker John Boehner has said that dealing with this president is like negotiating with a bowl of Jell-O. That is because he has no intention of cutting spending. Barack Obama’s inclination is to raise taxes and spend more money, period. Ronald Reagan once compared the federal government to a newborn baby: an insatiable appetite at one end and no sense of responsibility at the other. That, in a nutshell, is Barack Obama.

If this is leadership, we desperately need to redefine the term. Barack Obama is a dictator, not a leader. He demands. He demagogues. He sputters. He dictates. And then he follows those he has bullied. But then what did any of us expect from a community organizer who was still voting “present” in the state legislature just four short years before he was handed the most powerful position in the world?