The lame-duck session is now a reality, with both the House and Senate set to return November 15 for a one-week session, followed by a one-week break for Thanksgiving, and at least one more week at the beginning of December. It is possible Congress could stay in session throughout December in a replay of last year’s Christmas Eve health care vote. 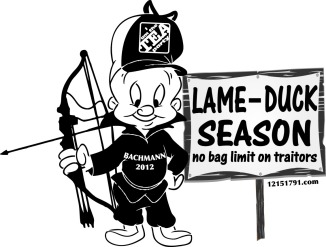 Harry Reid’s surprise re-election and the Democratic retention of the Senate greatly increase the threat. Reid will now falsely claim a mandate to proceed with a far-left agenda, despite the huge national tidal wave he survived. His retained power along with the last opportunity for a long time to push legislation through the House will combine to create a dangerous environment.

A recent article in The Hill confirmed Democrats may try to pass as many as 20 bills in the lame-duck session, and there is still some risk of an all-out push on everything from energy, to card check, to enormous Social Security tax hikes based on the president’s deficit commission recommendations.

Cap and trade may be a bridge too far, especially with the decisive defeat of many coal-state Democrats, including Rick Boucher, who represented a district in the Virginia coalfields. And Joe Manchin from West Virginia, a special election winner to fill out the term of deceased Senator Robert Byrd, will be seated for the lame-duck session. Manchin had the most memorable TV ad of the cycle in which he shot the cap-and-trade bill with a rifle.

That does not however mean we can discount the threat of a very damaging energy bill, especially because lame-duck Senator and Kansas Governor-elect Sam Brownback is pushing for a renewable electricity mandate bill.

Democrats will push these items because they don’t know when they will control the House again, and they expect more Senate losses in 2012 and 2014 because 2006 and 2008 were such big Democratic years.  So the narrow window of the lame-duck session is the last best chance to pass big-ticket, far-left agenda items.

Along with the potential threats above, there are two enormously consequential fights that are certain to occur in the lame-duck session, and we need to win them:

Democratic leadership punted on the expiring tax cuts when it became clear that they did not have the votes to protect only the middle class while slamming employers, investors, and upper-income workers with enormous tax hikes. That sets up another showdown in the lame-duck session, when bitter, already-defeated Democrats may again be inclined to refuse to protect all American taxpayers from a steep tax increase come January 1. The American people must demand Congress extend all expiring tax provisions, at least on a temporary basis, so that the people’s elected Congress has an opportunity to address the issue next year. This Congress failed in its duty to set tax policy and does not deserve a chance to hit us with tax hikes on the way out the door.

2. The First Vote on Funding ObamaCare

The failure of Congress to pass a budget or any of its annual appropriations bills means that the vote on a potential omnibus appropriations bill in the lame-duck session will be the first vote on funding ObamaCare, as well as being a vote to fund many of the Obama administration’s other unpopular programs, like EPA global warming regulations. If the funding is already in place, ObamaCare will move forward even if next year’s appropriations bills don’t fund it. The only way to respect the voters is to pass a clean, short-term continuing resolution that defers critical spending decisions until the people’s elected Congress takes power next year.

To win these fights and stop all of the lame-duck policy threats, we have launched a new web site at www.NovemberSpeaks.com and are holding a rally in Washington on November 15.  Everyone who worked so hard in this election cycle needs to refocus now on the lame-duck session and remind their senators that these are the first votes of the 2012 cycle and the American people are still paying very close attention.