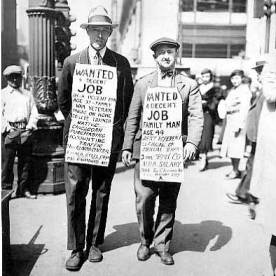 The latest unemployment rate in September of 9.6 percent is bad enough — a loss of almost 400,000 jobs since May. If you include those who have given up looking for work and those forced to take part-time jobs because they can’t find full-time work, the unemployment rate stood at 17.1 percent.

But even worse, the unemployment picture deteriorated dramatically after the Department of Labor did its survey in mid-September.

Instead of the government’s practice of surveying people over just a few days during the middle of the month, Gallup, an independent polling organization, does its own unemployment survey each month where they conduct 30,000 interviews over the entire month. They found that there was a huge increase in the number of unemployed during the last half of September, right after the Department of Labor’s survey was conducted.

The Gallup survey found unemployment rising to over 10 percent. In addition, 250,000 of the stimulus’ so-called “saved or created” jobs in 37 states just disappeared on October 1. Taken together, the Department of Labor’s October unemployment numbers, which won’t be officially released until Nov. 5 – just three days after the Nov. 2 midterm elections — will show a huge increase. Such a huge increase in unemployment a full 16 months after Obama’s “recovery” officially started is truly unprecedented.

Despite all the facts to the contrary, President Obama and his economists claim that they have managed to do a good job of getting the economy back on its feet. This ignores the fact that since Obama became president the U.S. unemployment rate has increased faster than 25 of the 30 other countries that “The Economist” magazine had data for from January 2009 to July 2010. Many of these countries refused to follow the U.S.’s massive government spending solution despite pressure from Obama.

Some people will undoubtedly believe the president’s false statements. — People are no longer aware of how incredibly bad the economy was during the 1970s and early 1980s. Unemployment then peaked at 10.8 percent during the end of 1982, right at the end of that recession, exceeding the 10.1 percent peak that we just experienced last year.

When Mr. Obama started his presidency, unemployment stood considerably lower — 7.6 percent. But Mr. Obama doesn’t want to take responsibility for any of the increase in unemployment since he became president, despite the obvious chaos and jobs moved around by his various stimulus and “jobs creating” bills.

Mr. Obama and his administration might want to keep claiming that this was the “Great Recession” to justify all their radical programs and interventions. — Remember Rahm Emanuel’s famous statement about not letting crises go to waste? But the facts simply don’t square with his claims. The only records being broken are for the stubbornly slow recovery.